Billboard Advert - I Need a Kidney

When you need a transplant, things can get a bit desperate after a long wait with no sign of success. so one couple decided to take a bold step and advertise for a donor.

Sharon Nelson, 73, had been on the waiting list for quite some time when she and her husband James decided to rent a billboard on the Interstate 70. After that James went out, climbed up a ladder and painted the problem in rather large letters. 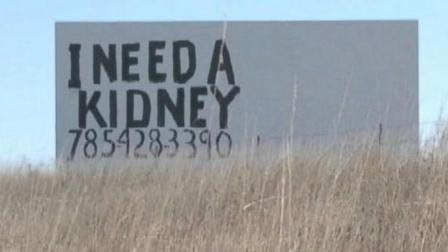 A nurse at their clinic said she knew a Milwaukee man who had found a donor for himself after renting a billboard. So they decided to give it a try.

Hopefully they will find someone. Until the right donor comes through it's just a matter of waiting, so she and husband can move on with their lives, Nelson said.

According to the National Kidney Foundation, over 96,000 people in the United States are waiting for a kidney transplant.

Original article can be seen here.

Velphoro® (sucroferric oxyhydroxide) has received US Food and Drug Administration (FDA) approval for the control of serum phosphorus levels in patients with Chronic Kidney Disease (CKD) on dialysis. Velphoro® will be launched in the US by Fresenius Medical Care North America in 2014.

Velphoro® (previously known as PA21) is an iron-based, calcium-free, chewable phosphate binder. US approval was based on a pivotal Phase III study, which met its primary and secondary endpoints. The study demonstrated that Velphoro®successfully controls hyperphosphatemia with fewer pills than sevelamer carbonate, the current standard of care in patients with CKD on dialysis. The average daily dose to control hyperphosphatemia was 3.3 pills per day after 52 weeks.

Hyperphosphatemia, an abnormal elevation of phosphorus levels in the blood, is a common and serious condition in CKD patients on dialysis. Most dialysis patients are treated with phosphate binders.

Viforo Pharma are part of of the Galenica Group, which in turn is part of Fresenius.