I'm not the world's greatest fan of Facebook, but it does have its uses. It's claimed to bring together old friends and classmates, but in the case of Tim Magsby, who had been on dialysis for four years, it did a bit more than that!

After four years worrying, with no close relatives suitable as a donor for a kidney, he turned in desperation to Facebook, and posted a video asking for help. Then an old school mate saw the video on a mutual friend's page and contacted Tim, even though they hadn't spoken to each other for 25 years. Tim was worried that it might be a joke, but Randy Riney, on thr left in the image, had the same blood type as Tim, on the right below, and the surgery was successful. 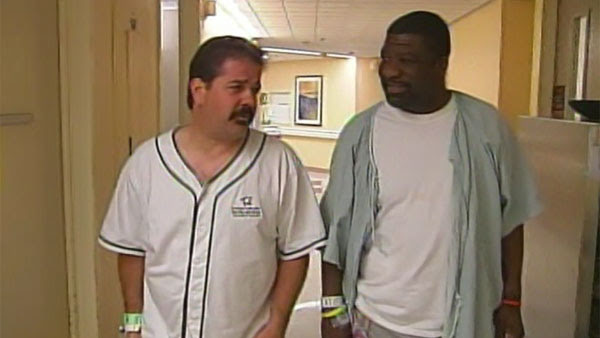 Original Story is here.
Posted by Dr John at 12:33

Many patients who undergo major elective surgery can develop kidney problems after surgery, due to decreased blood flow to the kidneys during the operation, or due to inflammation.

In a research paper to be published in the Journal of the American Society of Nephrology, researchers claim that taking a statin before surgery could protect the kidneys from being damaged. They examined the medical records of a large number of older patients in Ontario who underwent surgery between 1995 and 2008, and saw that those who were taking statins were 20% less likely to develop problems.

A total of 213,347 patients from 211 hospitals underwent major elective surgery, and 4,020 patients (1.9 per cent) developed postoperative kidney injury within two weeks of surgery. Of these, 1173 needed dialysis within 14 days of surgery, and a shocking 5,974 died with a month of their operations.
Posted by Dr John at 12:36