Yes, you read that right!

It was featured on the UK tv news on many channels, and several newspapers, such as The Guardian for 17th May 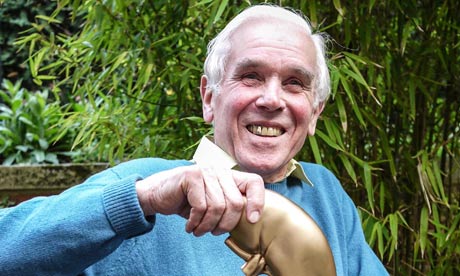 Nicholas Crace is officially the oldest living kidney donor in the UK (not sure about the world, but Google didn't seem to turn up anyone older, which wasn't a surprise). Nicholas thought about helping others some time after his wife died last year, as he had no dependents to worry about. He felt that with over 7000 people in the UK waiting for a donor, he could do some good as an altruistic donor (not donating to a relative, just to help someone)

After several months of tests and hospital visits, which assessed his kidneys as being in great shape), he underwent a three hour operation to remove a kidney. He is one of a rare breed in the UK - just over 100 other people have made a similar donation. The surgeon who carried out the operation, Sam Dutta, said that using a living donor works better, more quickly and lasts longer than a kidney from an accident victim who has joined the donor scheme.

Altruistic donors were "very special people", said Annabel Ferriman, chair of the charity Give a Kidney – One's Enough.
She is just so right!

Disrupting certain nerves in the kidneys can safely and effectively lower blood pressure in patients with chronic kidney disease (CKD) and hypertension, according to a study appearing in an upcoming issue of the Journal of the American Society of Nephrology (JASN). The findings indicate that the procedure might improve CKD patients’ heart health.

Overactivity of neurons in the sympathetic—or fight or flight—nervous system is very common in patients with CKD. It not only contributes to high blood pressure and heart problems in these patients, but also to worsening of their kidney disease.

Using radio frequency waves in a minimally invasive approach can disrupt the overactive sympathetic nerves of the arteries in the kidneys and lower blood pressure in patients with hypertension and normal kidney function.

According to Dr Markus Schlaich of the Baker IDI Heart & Diabetes Institute, in Melbourne, Australia, where the research was carried out, “These initial findings now open up an entirely new approach to better control blood pressure in CKD and potentially slow down progression of CKD and reduce cardiovascular risk in these patients."

The standard way to check for kidney problems is to have a blood test and the test centre assesses your kidney function by calculating your glomerular filtration rate using various factors including the serum creatine level measured. There is a standard equation into which is fed your age, sex, race and creatine level to calculate the filtration rate. The equation was proposed in 1999 and is known as the MDRD equation.

Recently researchers at the Johns Hopkins Hospital compared results from this equation with a new method, the CKD-EPI equation, looking at patients who were known to have kidney problems. The study looked at data from over one million patients! The results from using the new calculation method were found to be better at predicting whether patients had kidney problems, often putting patients into a higher category of risk than the older method.

The study involved over 200 collaborators and data from 40 countries. The original research was published in May 2009, and slowly labs are beginning to swap to using this newer way to calculate patient risk, a methodology that took almost ten years of research to come up with.

It's been reported (Health News article, 30th April) that one in ten Americans have chronic kidney disease, but most don't know it and for most it is not a problem, experts say. According to those experts interviewed in the report, in most cases the disease is mild and doesn't affect them.

But when it comes to screening people for kidney problems there appears to be insufficient data to say whether or not this is actually effective. For example, the article says there has been no analysis of how effective blood or urine tests for creatine are at detecting chronic kidney disease.

The U.S. Preventive Services Task Force is calling for studies on identifying and treating chronic kidney disease. They also say it isn't known what the effect would be of treating otherwise healthy people whose disease is not currently a problem.

In the case of those at higher risk of CKD, such as those with diabetes or high blood pressure or African Ammericans, screening is still recommended, as there is evidence this is effective.

It was also pointed out that as most people's kidneys decrease in function with age, mass screening of healthy older people would worry those otherwise healthy individuals whose reduced function was detected.